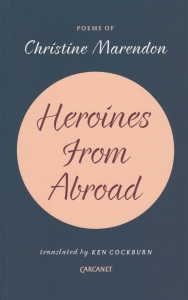 Heroines from Abroad, newly published by Carcanet, is a bilingual (German / English) edition of poems by Christine Marendon, alongside my translations.

Christine will be in Scotland this summer, and we are launching the book on 13 July at 8pm at Lighthouse in Edinburgh.

I discovered Christine’s poems via a mutual friend, the poet Arne Rautenberg. Christine had been invited to a festival in Slovenia, and needed English versions of six poems – could I make the translations? I enjoyed their enigmatic imagery and shifts in tone, and made the translations, helped by a correspondence with her.

Several years elapsed, when I always had in the back of my mind that I’d like to return to her work. I came across poems online, and have been translating her slowly but steadily since 2011; translations have appeared in Shearsman, Modern Poetry in Translation, New Books in German, and online at www.no-mans-land.org.

We met for the first time in March 2014, in Hamburg where she lives; shortly afterwards we were invited to read together in London by Sasha Dugdale, then the editor of Modern Poetry in Translation, and it was a pleasure to hear her measured reading voice.

From Bavaria, she grew up speaking both German and Italian, and only began writing in her poetry in her thirties, after attending a reading by the poet Hilde Domin (1909–2006). In Germany her work is published online, and in magazines and anthologies, but she still awaits a first collection. As a translator, she has made German versions of poems by James Wright.

‘Marendon’s work may bridge for English-language readers the perceived chasm between avant-garde and mainstream poetry. It’s not obscure, it’s not banally ‘accessible’. The voice and the language of Cockburn’s translations feel freshly rinsed.’ Carol Rumens

I was in Germany in March, visiting friends in Kiel, and had the chance to visit Husum, on the west coast of Holstein. It was here that the 19th century writer Theodor Storm lived for many years, and I happened to be reading his novella Der Schimmelreiter (The Rider on the White Horse), so I looked into his old house, now a museum.

The copy of Der Schimmelreiter which I was reading had been given to me by a friend, who’d meant to buy an English translation but had got a German edition instead. I thought I should take some photos of the book in situ, having as it were found its way home.

Later I enjoyed a reading by the poets Arne Rautenberg and Hendrik Rost at Der Speicher, an old warehouse on the quay. I spoke to Hendrik afterwards. He has three children, and said he wrote a whole book of poems on the commute between Lübeck and Hamburg, and could even quantify the time thus spent – 560 hours. 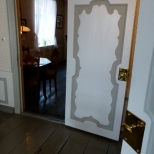 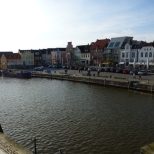 The German poet and artist Arne Rautenberg visited me in Edinburgh recently. We read together at the Goethe Institut Glasgow, and at the Edinburgh Bookshop – along with Peter Manson, presenting his fine Mallarmé translations – so thanks to everyone who came on those evenings.

I made some new translations for the readings, of poems from Arne’s most recent book, Mundfauler Staub (Taciturn Dust). This is a translation of ‘abspann’.

the man: my father
the woman: my mother
the child: me
reconstruction

the man: me
the woman: my wife
the child: my daughter
happiness

Arne and I, accompanied by Angus Reid, also walked part of the Fife Coastal Path, between Kirkcaldy and Aberdour.

After a long hibernation, the days are getting longer and several events in the diary are getting closer.

First up is a launch event for Out of Books, with Alec Finlay, on Thursday 11 April at 6.30pm, at the Scottish Poetry Library, and a second event as part of the Boswell Book Festival at Auchinleck, Ayrshire, on Sunday 19 May. Out of Books is collaborative project inspired by Boswell and Johnson’s 1773 journey across the Scottish Highlands and Islands. Taking their texts as their guides, we’ll set out to revisit particular landscapes and recover particular views. Over the summer and along the route we will host a series of events inspired by their antecedents’ famous journey, with further events in and around Inverness, on the Isles of Skye, Coll and Mull, and in Inveraray.

Barrie ‘Caseroom’ Tullett is visiting Edinburgh for the Fruitmarket Gallery Book Fair on Saturday 20 April. I’ll do a stint on the table as well, and read something from Snapdragon about 12.30.

Arne Rautenberg is visiting Scotland later in the month, and we’re doing two readings together – at the Goethe Institut in Glasgow on Tuesday 23 April at 6.30pm, and at the Edinburgh Bookshop the following day at 7.30pm (this is the Facebook page about it).

In May, I’m leading two poetry walks in the Royal Botanic Garden Edinburgh, on Saturday 11 and Sunday 12, both at 2.00pm. Content still to be decided, but certainly some Chinese classics, haiku, maybe Burns in rural-floral mode, something from The Road North…

And finally, a reading with Pierre Joris and Lila Matsumoto at Little Sparta on Sunday 26 May at 5.00pm, linked to the University of Glasgow’s Assembling Identities conference. Tickets are available here.

Perhaps the snow will have melted from the Pentlands by then.

Autumn seems to be the time translations appear – a smaller crop than last year’s, but there are two publications to mention. No Man’s Land, the online journal for German writing in English, has published my translations of Arne Rautenberg – several haiku, and ‘gingko leaf fairy tale’, about coming across a pressed leaf in a copy of Grimm’s Fairy Tales. Those poems, and many more, are included in Snapdragon.

The recent issue (3:18) of Modern Poetry in Translation is on the theme of Transitions. It’s the last to be edited by David and Helen Constantine, who share this issue with their successor, Sasha Dugdale. I’ll be sad to see them go – they have consistently published work of interest from a generous range of poets and translators, and have been very supportive of my work, taking versions of Thomas Brasch, Thomas Rosenlöcher and Heiner Müller. This issue features translations of three poems by Heinz Czechowski (1935–2009), a writer I’ve just discovered this year, and who skillfully interweaves his private and public selves, the historical and the contemporary, the literary and the mundane. You can read one of the poems here.

Beside them are other translations of Czechowski by Ian Hilton, a former professor of Germany at Bangor University, who has known his work for much longer than I have, and who many years ago met the poet on the eastern side of the Berlin Wall.

Snapdragon is a newly published collection of my translations of poems by the German writer Arne Rautenberg, made over the past decade. Arne lives in Kiel, where I’ve visited him on several occasions, and he has been to Scotland twice, in 2003 and 2007.

As all books are, it is a collaborative effort. I was introduced to Arne by Alec Finlay, who has written the cover blurb above; Stewart Conn heard Arne and me read in Edinburgh and 2003, and his poem ‘Translations’ describing that occasion is included; the book is designed and laid out by Barrie Tullett, with whom I’ve worked on many projects over the years; and the cover was designed by Jantze Tullett, Barrie’s wife.

The ladybird
On the hibiscus flower
In the ashtray

The poems are fomally varied: monologues, lists and fairy tales – haiku, double haiku and football haiku – one-word poems, nudges and inversions. They are presented as parallel text, German on the left and English on the right.

Between turbulence
And the monstrous rivets
A beckoning home.

His gaze deep in the
Rear wheel of a juggernaut
Thundering on by.

(from ‘Kiel After Rain’)

I mention my choice of title in the Afterword: “I settled on Snapdragon as it seemed to sum up much of Arne’s work: a flower-name, so a word that’s rooted in the real, something delicate and beautiful; yet also with outlandish and unsettling associations.”

A review by Lesley Harrison has appeared in Northwords Now, no.22 (if you download the pdf, it’s on p.22). “I don’t speak German, but the English versions conjured very clearly a city-world still recovering from war, and Cockburn’s clipped, wry translations seem to be a perfect window to it, both clever and compelling.”

If you’d like to buy a copy, it’s available via The Big Cartel.

ctrl+alt+del describes itself as ‘a contemporary poetry foldable/printable ezine’. You can find it here. You print it out on a single sheet of A4 and there is a natty video that shows you hold to fold it. Issue 1 has work by Peter Hughes, whose pamphlet ‘Paul Klee’s Diary’ I enjoyed back in the mid-90s. Issue 3 has some mesostics by myself, and ‘twelve switches’, a translation I made of a poem by Arne Rautenberg (though as you may notice I can’t always count accurately). I like what CAD is doing visually – it reminds me of the late Duncan Glen’s magazine ZED 2 O, with its zany but thoughtful design.