I recently ran some secondary school workshops for the StAnza poetry festival.

This year’s StAnza artist-in-residence, Astrid Jaekel, chose two poems I’m very familiar with for her festival exhibition, Plastik (Kunst). One is by the German poet and artist Arne Rautenberg, which I’d translated as ‘i declare the plastic debris of the oceans’. The other is George Mackay Brown’s ‘Beachcomber’, a poem I’ve used many times in workshops. Astrid’s lasercuts of the poem can be seen along Rose Street in Edinburgh.

In class pupils were dealt a ‘hand’ of three cards, plus a rule, and asked to write a poem or poems. They then wrote their poems on luggage-labels and tied these to pieces of jetsam. (Between sessions, the class and their teacher at Waid Academy, Anstruther, went out and gathered their own plastic debris.)

These poems+objects were exhibited during StAnza, upstairs in J.G. Innes, the bookshop and stationer’s on South Street. 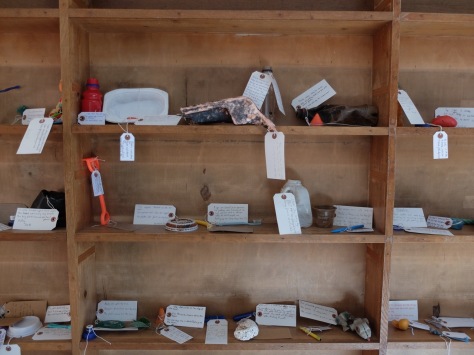 My thanks to all involved at Madras Academy, Waid Academy and St Leonard’s School, and at StAnza.