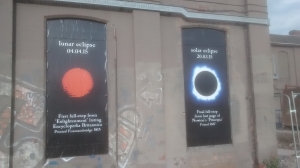 Coinciding with the lunar eclipse on 4 April, and following the recent solar eclipse, David Faithfull’s ‘Moon draws Sun / Earth draws Moon’ has been projected onto the side of Castle Mill Works in Fountainbridge. As part of the Dark Matters project, we discussed in situ the installation and its connections with Enlightenment Edinburgh. (Thanks to Judith Liddle for the photos below.)

The Encyclopaedia Britannica was founded in Edinburgh in the 1760s, and early editions were printed in in Fountainbridge. The city at the time was just beginning to expand from the old town huddled for protection beneath the castle; and of its home city the EB states approvingly that “a plan of a new town to the north is fixed upon, and is actually carrying into execution with surprising rapidity, and with an elegance and taste that does honour to this country.”

I read parts of the ASTRONOMY ‘treatise’ from the first edition of the EB from 1768. While telescopes had given us a sense of the size of the universe, we had as yet no sense of geological time – that had to wait until James Hutton’s Theory of the Earth, elaborated in the 1780s and published in book form in 1795. And the author’s belief in a benevolent deity led him to this, to our minds certainly, surprising conclusion:

[There is] no room to doubt, but that all the planets and moons in the [solar] system are designed as commodious habitations for creatures endued with capacities of knowing and adoring their beneficent Creator. (…) From what we know of our own system, it may be reasonably concluded, that all the rest are with equal wisdom contrived, situated and provided with accommodations for rational inhabitants.

This, the author contends, extends even to comets:

The extreme heat, the dense atmosphere, the gross vapours, the chaotic state of the comets seem at first sight to indicate them altogether unfit for the purposes of animal life, and a most miserable habitation for rational beings ; and therefore some are of the opinion that they are so many hells for tormenting the dammed with perpetual vicissitudes of heat and cold. But when we consider, on the other hand, the infinite power and goodness of the Deity, the latter inclining, and the former enabling him to make creatures suited to all states and circumstances ; that matter exists only for the sake of intelligent beings ; and that where-ever we find it, we always find it pregnant with life, or necessarily subservient thereto ; the numberless species, the astonishing diversity of animals in earth, air, water, and even on other animals ; every blade of grass, every leaf, every fluid swarming with life ; and every one of these enjoying such gratifications as the nature and state of each requires ; When we reflect moreover, that some centuries ago, till experience undeceived us, a great part of the earth was judged uninhabitable, the torrid zone by reason of excessive heat, and the frigid zones because of their intolerable cold ; it seems highly probable, that such numerous and large masses of durable matter as the comets are, however unlikely they be to our earth, are not destitute of beings capable of contemplating with wonder, and acknowledging with gratitude, the wisdom, symmetry, and beauty of the creation ; which is more plainly to be observed in their extensive tour through the heavens, than in our more confined circuit. If further conjecture is permitted, may we not suppose them instrumental in recruiting the expanded fuel of the sun, and supplying the exhausted moisture of the planets? However difficult it may be, circumstanced as we are, to find out their particular destination, this is an undoubted truth, that wherever the Deity exerts his power, there he also manifests his wisdom and goodness.

Reading this, I am surprised Edinburgh was not also the founding city of science fiction literature. 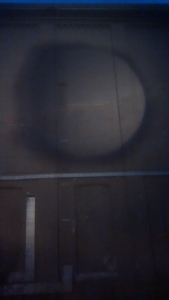 Come dusk, the generator was switched on, and David’s installation played over the wall of the Castle Mill Works, a former rubber factory, earmarked to become the new home of Edinburgh Printmakers Workshop in a few years time.

And come dusk, we were all feeling the cold, and were glad of a chance to warm ourselves around the bonfire. 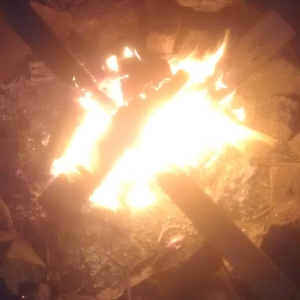 Last autumn I took part in The Written Image, an exhibition organised by Edinburgh Printmakers Workshop and the Scottish Poetry Library. Poets and printmakers were paired, and I worked with Cat Outram. When we met she was just about to visit Orkney for the first time, and I’d visited the previous summer, so that became our theme. We came to settle on four of Cat’s images that seemed to give a good overview of Orkney: FERRY (geography), FARM (economy), BEACH (ecology), and BRODGAR (archaeology). I returned to a notebook I’d kept while there in 2012, and another relating to an unrealised project at John O’Groats; for each image I composed a 4-line stanza, guided by half-rhymes. The order in which the stanzas can be read is interchangeable. ‘The Maidens’ are one of the powerful tidal currents, or ‘races’, in the Pentland Firth. 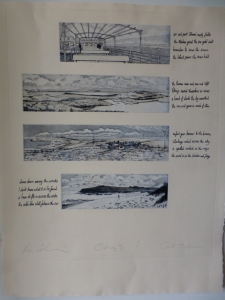