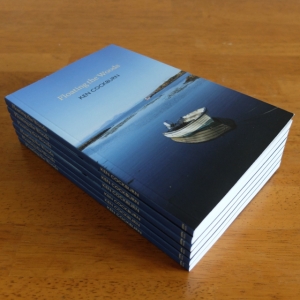 Last week I had my first sighting of Floating the Woods, a new collection of poems published by and available from Luath Press, and launched on Thursday 29 March at the Scottish Poetry Library.

The cover blurb reads, “the places in Floating the Woods are mainly Scottish, stretching from the Borders to Orkney, taking in Edinburgh, the Tay estuary and the River Ness. Through these landscapes move figures from the past – real, legendary and imagined – as the routes of Romans, Vikings and Celtic saints are followed by later figures such as Wordsworth, James Hogg and John Muir. Further afield the First World War casts a long, dark shadow over otherwise idyllic English and Belgian scenes. There are alphabet, calendar, list and found poems, dealing with imaginary shades of blue and the imponderables of etiquette.” 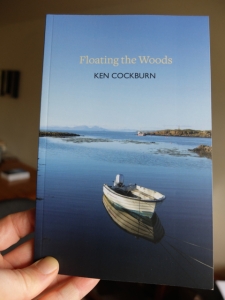 I am grateful to Jen Webb, editor of the Australian journal Meniscus, for her text which also appears on the cover. “List the things that matter, and what is likely to appear are stories, and buildings, the birds that fly between them, the hills and streams and skies that surround them, the ordinary stuff of everyday life lived alongside the felt presence of ancient recent history. Ken Cockburn’s new collection captures all this, in the lyrical lists, shape poems and sound poems filled with sharp yet tender observations of the world through which he moves. In a gloriously demotic voice that remains deeply immersed in the long traditions of poetry, he paints space, and place; and in his hands, language finds a mouth.”