Earlier this year I wrote a sequence of poems about the Isle of Jura, for a book by the photographer Charles March. Charles contacted me out of the blue, thanks in part, I think, to a poem I’d written many years before about the island. 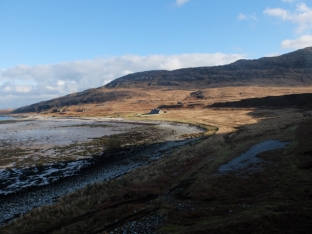 I visited Jura at the start of February, and was taken by boat to Glenbatrick on the west coast, where Charles had taken his photographs over the previous four or five years. Above the beach, and the rugged coastline either side of it, are a number of raised beaches, created by the land gradually rising after the glaciers melted. Looking inland, the Paps of Jura dominate the skyline – Beinn na Oir, Beinn Siantidh and Beinn Chaolias.

In May and June, Charles’ photographs were featured in an exhibition at the Palazzo Borghese in Rome, where a sample copy of the book was on display.

I received copies of the book just this week – I’d forgotten how large it was. The images are beautifully reproduced, catching the shifting and subtle colours of the Hebrides.